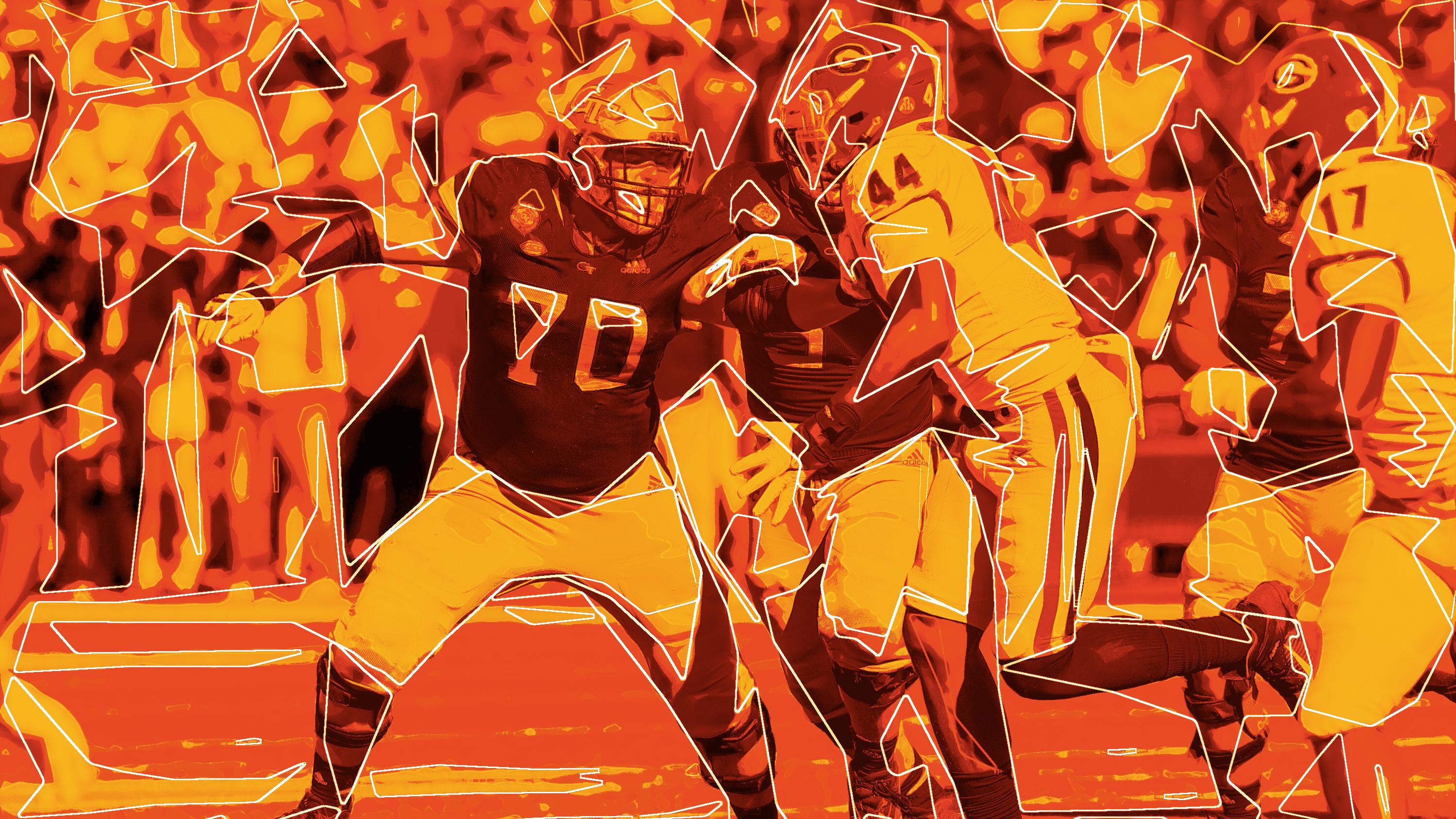 That the 2021-22 College Football Playoff featured a pair of SEC powerhouses steamrolling their way into the championship game was not shocking. In the resulting championship game in Indianapolis, the Georgia Bulldogs overpowered the Alabama Crimson Tide and ultimately cruised to a fairly comfortable victory is a bit more surprising. However, the ‘Dawgs' historic dominance on defense all season long and the fact that Kirby Smart’s team featured an incredible fifteen players who went on to be selected in the 2022 NFL Draft does temper that shock a bit.

2nd Chance Bet: Up To $500 in Free Bets - Connecticut Exclusive

Apologies for resorting to a cliché right off the bat, but… death, taxes, and ‘Bama.

In about any other season, Alabama would have cruised to a fourth title in seven years and run Nick Saban’s career tally up to a ridiculous eight national championships. Unfortunately for the Tide, 2021 happened to be the season in which Georgia - led by former Bama defensive coordinator Kirby Smart - saw years of top-notch recruiting come to fruition.

Even in the wake of that 15-point loss in the national championship game, Alabama was on par with that most dominant of Georgia teams, averaging nearly 490 yards per game of total offense while allowing just under 303 and beating the ‘Dawgs by 17 points in the SEC title game a month earlier. Sure, Bama lost a lot of talent to the NFL, but that’s an annual occurrence. And no coach has a greater gift for seamlessly replacing top-tier talent than Saban. In addition to the usual army of five-star recruits arriving for 2022 are transfers Jahmyr Gibbs (college football’s active leader in all-purpose yards), Jermaine Burton (Georgia's leading wide receiver in 2021), and LSU cornerback Eli Ricks. In addition, headlining the returnees are last year’s Heisman Trophy winner, quarterback Bryce Young, and Bronko Nagurski Award winner as the nation’s outstanding defensive player, superstar linebacker Will Anderson.

On the one hand, there’s seemingly not much value in picking any team to run the SEC gauntlet without missteps in exchange for just two-to-one odds. On the other hand, over the past decade and a half, there’s not been much value in betting against Bama, at any odds.

Ohio State: Don’t Expect Another “Down Year” from the Buckeyes

In recent years, few (if any) programs outside of Alabama have been as consistent a “sure thing” as Ohio State. In three years since transitioning from Urban Meyer to Ryan Day, the Buckeyes have posted a 34-4 record, with one conference loss. Unfortunately, two of those losses - including that one in the Big Ten to arch-rivals Michigan - came in 2021. Thanks to a “subpar” 10-2 regular season record, and Cincinnati’s perfect regular season, OSU, despite averaging more than 560 yards of offense and five touchdowns per game, was on the outside looking in come playoff time last winter.

Like Bama, the Buckeyes return a superstar quarterback in Heisman finalist C.J. Stroud, who had 4,435 passing yards, 44 touchdowns, and just six interceptions in 2021. Stroud, surrounded by an army of five-star recruits, with yet more top talent waiting in the wings, and a schedule that has the Buckeyes play their three toughest games (Notre Dame, Wisconsin, and Michigan) at home, makes OSU a solid bet to not only make the playoff but to go all the way. If you're feeling confident backing OSU, it's worth checking out our breakdown of the NCAAF Championship odds.

Georgia Bulldogs: Even the Sturdiest Locks Sometimes get Picked

Do not misconstrue this as a bet against the remaining talent on hand, Georgia's place in the SEC East, or Kirby Smart’s recruiting and coaching acumen.

The fact is, no matter how talented the replacements, few teams (even one returning its starting quarterback) can lose fifteen key players - including the core (and the coordinator) of an all-time great defense - which allowed just 10.2 points per game and averaged, comfortably, more interceptions (1.1) than touchdowns allowed (0.9) per game - and its top two receivers - and replicate Georgia’s hilarious dominance of a year ago.

That said if Georgia can navigate a tricky “neutral site” (Atlanta) opener against an Oregon team that their former D-coordinator now coaches, this team should be in the conversation. In addition to their returning talent, Georgia has a favorable SEC schedule in 2022, with no Alabama and Texas A&M out of the West and just one challenging road game (away to Tennessee on November 5; Auburn and Florida have to go to Athens). Seeing the ‘Dawgs put together another fantastic season would not be surprising. However…

Betting on a team that’s replacing this much to slip up no more than once before a (likely) SEC title game rematch against Alabama doesn't feel like great value.

No team in college football has had a more potentially transformative offseason than USC. On the heels of the underwhelming Clay Helton era, USC poached one of college football’s top coaches, Oklahoma’s Lincoln Riley, whose arrival has also brought the transfers of a blue-chip quarterback (Caleb Williams) and wide receiver (Jordan Addison), both formerly of OU, and a jolt of energy that’s long been missing from this once-legendary program.

Now, there is the issue of rehabilitating one of the nation's worst defenses - which allowed 31.8 points (103rd out of 130 FBS teams), 410.1 total yards (#90), and 2.3 rushing touchdowns (#116) in 2021 - thus the somewhat long playoff odds. This will take more than a single recruiting class and the arrival of some talented transfers. However, the Trojans face an extremely friendly schedule in 2022, including just three truly tough games: a mid-October trip to Utah and two games in L.A. - “away” to crosstown rivals UCLA and home against Notre Dame - to close out the regular season.

Assuming some improvement on defense, USC’s road to the Pac-12 championship game should be straightforward.

In addition to Georgia, another pair of powers, Clemson and Texas A&M, warrant a shout. A&M (+700) has recruited spectacularly of late (their 2022 class has been mentioned as “maybe the best ever”), but that takes some time to pay off. Jimbo Fisher will be counting on another fantastic performance from his defense (3rd-fewest points allowed and top-15 in total yards allowed per game in 2021) while working in a new quarterback (LSU transfer Max Johnson) into an offense that underwhelmed (58th in points scored, 88th in passing yards and 71st in total yards per game in 2021) to run the table against a schedule that includes home games against Miami, Ole Miss, and Florida and a midseason trip to Alabama.

Clemson, meanwhile, despite another outstanding defensive showing in 2021 (14.8 points allowed per game, second only to Georgia), is getting an awful lot of respect at (+145) for a team that’s replacing both coordinators and returning a quarterback in DJ Uiagalelei, who underwhelmed in 2021, “leading” the nation’s 103rd-ranked passing attack with just nine touchdowns and ten interceptions. The Tigers will have to for their return to dominance.

The College Football Playoff odds tell us a very stark story. Predicting it to be a two-horse race between Alabama and Ohio State. For Alabama, after missing out at the final hurdle, they’ll be sure to chuck everything they have at a shot of winning their fourth title.

Alabama is currently leading the odds in the race to the playoffs and are a sensible backing for our College Football Playoff predictions. But, are there any outliers you've got your eye on? If you're looking for more football content, be sure to read our guide: How To Bet on College Football, and visit our odds comparison tool to compare the latest odds.