Want to Bet on a Same Game Parlay? In-Depth Guide, Tips and Winners

Landing a juicy same game parlay is a long shot. But regardless of the outcome, they promise thrilling action and make any game more interesting. Read our guide to understand how same game parlays work and the best betting strategies for them.

What is a Same Game Parlay?

A same game parlay is essentially a parlay that combines bets from the same game for any sport such as NFL, MLB, or NBA.

Historically, bettors could parlay two legs from the same game in a teaser bet. The innovation of the same game parlay comes from combining more than two legs in the same wager, including alternate lines, and player, or game props.

You can expect a same game parlay to feature bets from the following:

Same game parlays are generally available on all the main US sports at the biggest sportsbooks.

FanDuel is the godfather of the same game parlays as they were the first to offer this in 2019 and have never looked back, enjoying a lot of success. Yeah, first mover's advantage, but their product is also excellent.

The most basic SGP is a two-legs bet, such as Raiders -1.5 and over 40.5. But most bettors want to tie more legs together and aim for the moonshots. On that note, we'd say anything above +5000 is worthy of being a moonshot.

SGPs have a unique quality that unites both sides of the marketplace - sportsbooks and players. The books like them because they are very profitable, while the players love chasing the moonshots with low stakes and high potential payouts. Same game parlays can also make games much more interesting for bettors, with skin in the game on every single play.

Why should you care about Same Game Parlays?

A same game parlay can make a dull game much more exciting as it gives you a vested interest in each of the legs, so you will follow each play of the game closely.

For us, it's the only way we can watch a Jaguars or a Lions game.

Beyond making games more thrilling than they are, they can also cash in for quite significant returns. In many ways, they are similar to lottery tickets. Still, we've seen winning same game parlays much more often than winning lottery tickets, so make what you will of that.

Although sportsbooks have high margins on SGPs, this is a new product where you can capitalize on pricing errors. That is especially true if you are big on a sport or team and are willing to shop around and try the best SGP combinations.

However, we mainly like SGPs because we believe they are the future of sports betting - they allow you to be the master of your bet, and who doesn't want that?

We'd suggest you approach the same game parlay by creating a narrative for the game you want to bet. Then, check the betting menus for bets suited to that.

For instance, let's say you think the Giants will win comfortably against the Patriots in a high-scoring game and that Daniel Jones will have the game of his life. Maybe you believe Saquon Barkley will play a big part as well.

You can easily open your favorite sportsbook and turn this into a Same Game Parlay with some main props and specific player props for Jones and Barkley.

What are Examples of Same Game Parlays?

Shopping around for the best odds for your Same Game Parlay can be incredibly rewarding. Take this example, where we combined the next legs in a SGP:

In this example, on a $100 bet, you would have won almost double with FanDuel. That's almost $2k on a $100 bet, so we'd say definitely worth the extra 5 minutes we spend shopping for the best odds.

*DraftKings and Pointsbet did not allow us to parlay the over 9.0 runs, so we had to choose the closest alternative. 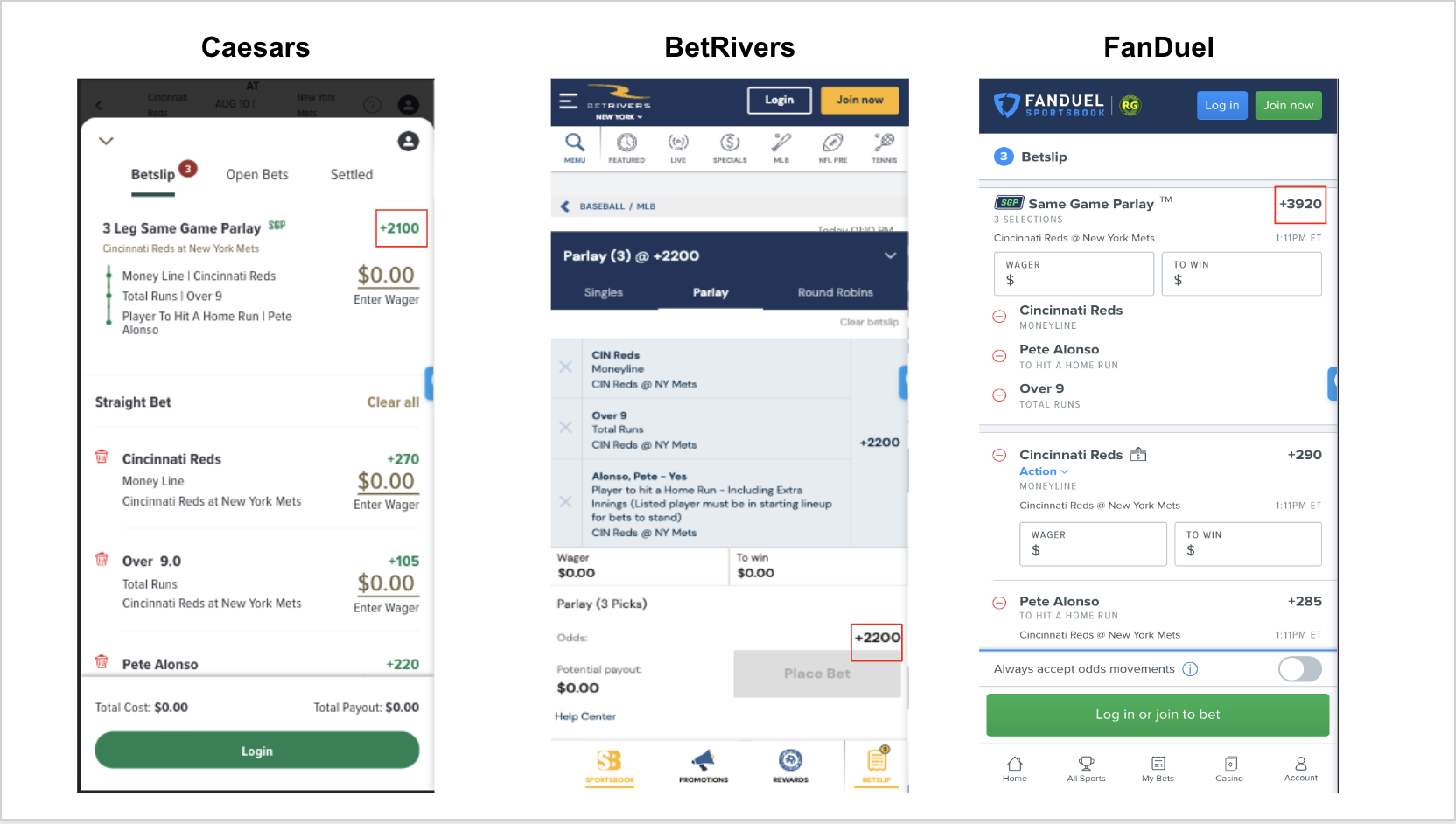 How does a Same Game Parlay work:

As a Same Game Parlay combines multiple legs in the same bet, we might expect the final odds to be the result of multiplying the individual portions.

However, that is not the case, as it wouldn't address the potential correlation of those individual events.

First, let's see what an uncorrelated parlay looks like:

This is possible because the two outcomes are uncorrelated, meaning they don't impact each other.

So, the odds for this parlay wouldn't be the odds of leg 1* leg 2, but smaller, as the books will deduct a correlation fee.

More often than not, they will also add a cushion to account for any potential miscalculations on their behalf.

That's why many professional handicappers stay away from same game parlays - there is quite a lot of tax built in. That's not only due to greed but because SGPs is a novel product, pricing them can be difficult.

We mentioned above that there could also be some opportunities for the keen same game parlay researchers.

What are Same Game Parlay rules?

SGPs are simple in practice. Take any game you like, select a minimum of two bets and place your bets.

However, two elements can create some challenges: voided and pushed legs.

FanDuel seems to have the friendliest rules, although if you have a voided leg on a losing SGP, you'd prefer to have the full bet voided. 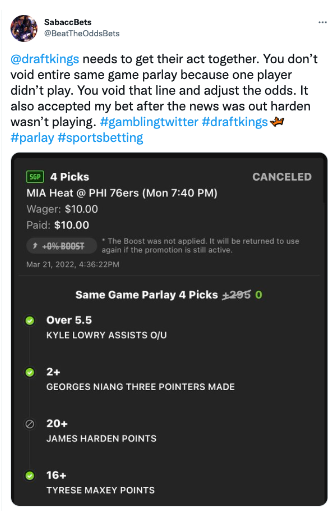 Are the numbers backing up the Same Game Parlay Bonanza?

More than speculation and user sentiment supports the increasing popularity of SGPs.

Before we wrap up, let's look at some Same Game Parlay moonshots that cashed in for inspiration. 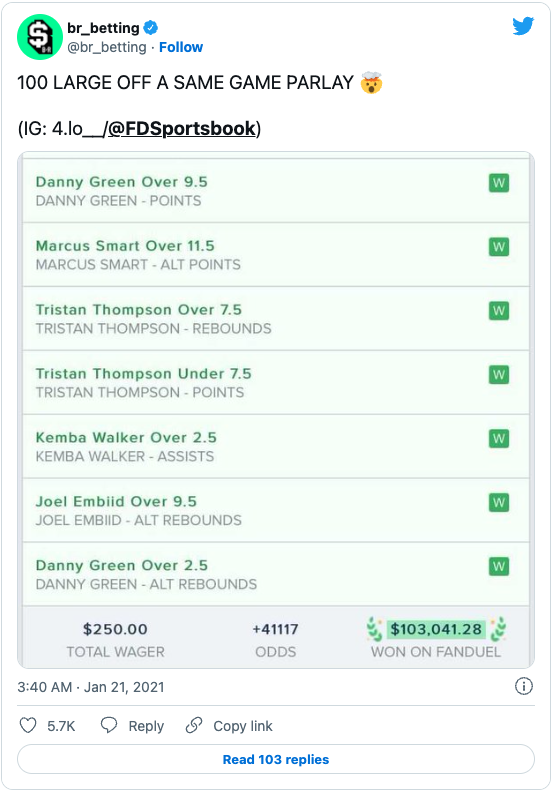 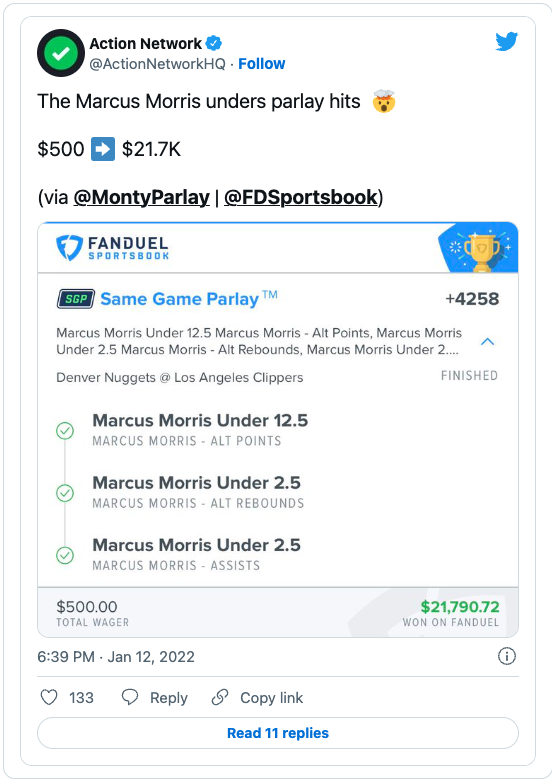 Looking to understand how parlay bets work in sports betting? Here’s everything you need to know about parlay bets.

How does a Same Game Parlay work?

A Same Game Parlay is essentially a parlay that combines bets from the same game for any sport such as NFL, MLB, or NBA.

The innovation of the Same Game Parlay comes from combining more than two legs in the same wager, including alternate lines, and player, or game props.

You can expect a same game parlay to feature bets from the following:

Same Game Parlays are generally available on all the leading US sports at the biggest sportsbooks.

Can you Parlay Spread and Over/Under in the Same Game?

Yes, you can. This is usually called a teaser bet. With Same Game Parlays, you can add different bets, such as game or player props.

Can you Cash Out a Same Game Parlay?