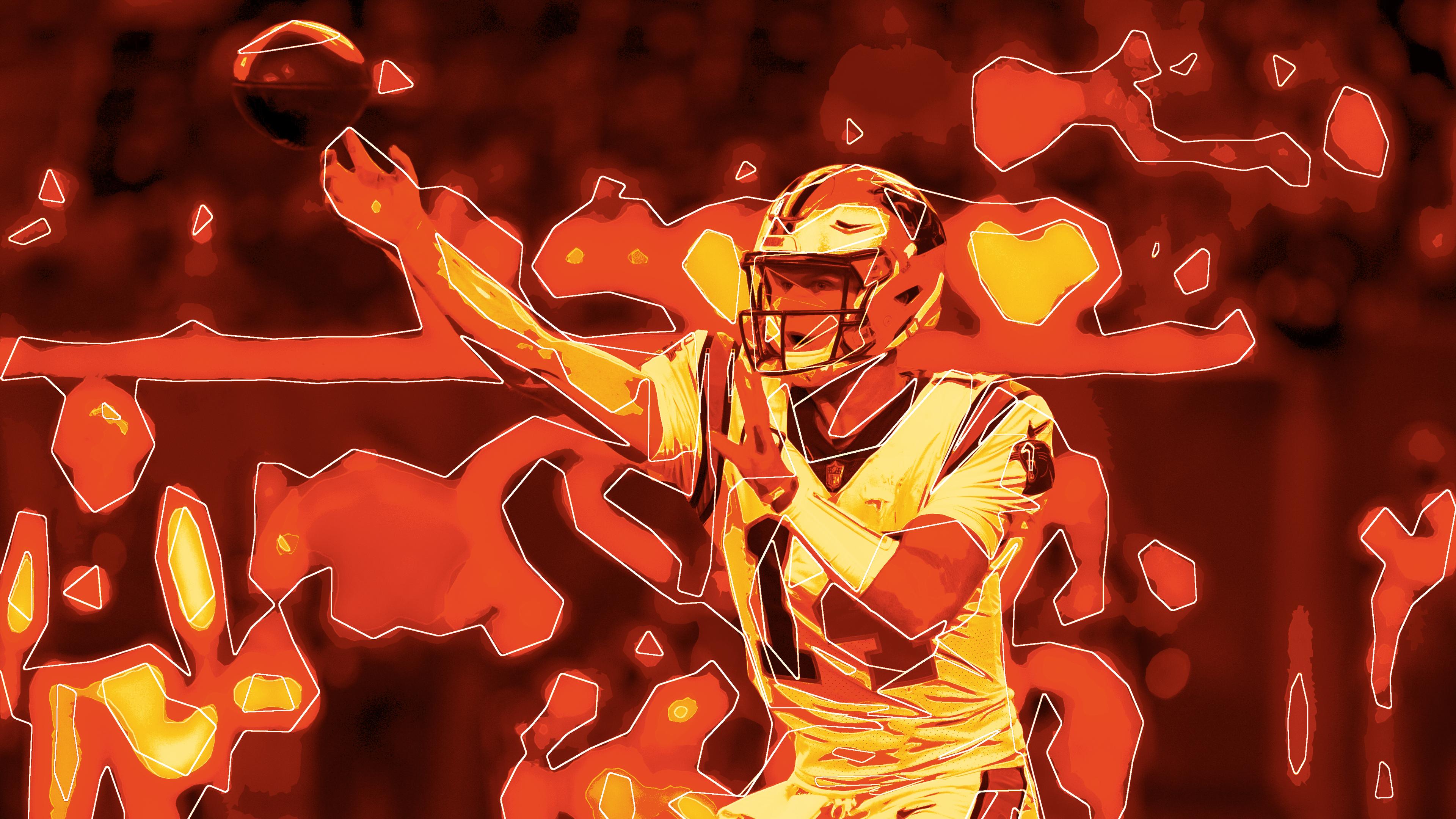 In 2022, the NFC South, though still not “wide open,” should feature an interesting two-way tussle for the division crown.

The odds to win NFC South make it feel like a foregone conclusion. That’s not a shock, given that, two years ago, Tom Brady rolled in and joined a Buccaneers team stocked with talent on both sides of the ball. Against that backdrop, the division’s two other franchise quarterbacks aged out of their primes. The Falcons abandoned the dream of a resurgence, dealt Matt Ryan, and have embraced the tank. Even with Drew Brees and Sean Payton gone, the Saints are, as ever, in win-now mode, only now with plans of riding a juggernaut defense back to contention.

And, lest we forget, the Carolina Panthers are somewhere in the mix - always home to some intriguing talent but too short-handed on the offensive line and at quarterback to translate any of that into relevance. Though they’re trying, this season will likely be similar to last.

Questions and storylines surround all the teams from top to bottom. Let’s take a closer look at how the sportsbooks view them and make some NFC South predictions!

There's a case to be made that more than winning league MVP or reaching a Super Bowl, winning seven games with the 2021 Falcons roster is the crowning achievement of Matt Ryan's career. The Falcons spent a half-decade before last season stubbornly refusing to rebuild, while the Ryan-Julio Jones era passed its sell-by date.

The rebuild began a year ago, with the departure of Jones. Now, Ryan’s gone, too, traded to the Colts. What’s left is one of the NFL’s most barren top-to-bottom rosters. The defense features two-star level talents (veteran defensive tackle Grady Jarrett and soon-to-be-24-year-old cornerback AJ Terrell) and almost nothing else. Jones’s presumptive heir at wideout, Calvin Ridley, will miss the 2022 season due to a suspension for betting on NFL games. The offensive line needs a rebuild. And, stepping in under center is theoretically competent but deeply underwhelming journeyman Marcus Mariota, who’s keeping the seat warm for far-from-sure-thing third-round rookie Desmond Ridder.

There is, however, one spectacular bright spot on this roster: the #4 over pick from the 2021 NFL Draft, tight end Kyle Pitts. Simply put, this is one of the greatest pure talents ever to play the position.

Pitts, who doesn’t turn 22 until October, was fantastic as a rookie, catching 68 passes for 1,026 yards. Maybe the downgrade from Ryan to some Mariota-Ridder combo will keep him from approaching those numbers as a sophomore. More likely, however, is the exact opposite. For a team with massive questions at QB and little othern talent, a six-foot-six, 250-pound pass catcher with speed, great hands, and a hilarious catch radius is as valuable a player as there is.

The Falcons will be genuinely awful this season. Their +400 odds with FanDuel to finish with the league’s worst record is excellent value. However, even on the worst rosters, superstar talents shine. This team has a nailed-on superstar in Pitts, who should be targeted at a historical rate and manage 951 receiving yards (56 per game) - 75 fewer than he had as a rookie. Among these NFC South predictions, this is my favorite.

These NFC South predictions are as chock full of recommended bets as any in this preview series. The explanations for this?

It’s not completely out of the realm of possibility that things go horrendously wrong in both New Orleans and Tampa, inviting the Panthers into one of the most underwhelming division races in NFL history. A 15-to-1 lottery ticket could come in handy in the unlikely (but possible!) scenario in which the divisional dominoes fall just so.

I know, this is a team that won all of five games last season - and I can't condone betting them at around even money to win seven games. However, this is a team with quality at each level (tackle Brian Burns, linebacker Shaq Thompson and #8 overall pick in the 2021 draft Jaycee Horn at corner) of a defense that allowed the third-fewest yards-per-play last season, a top prospect (2022 #6 overall pick Ikem Ekwonu) slotting in at left tackle, a healthy Christian McCaffery (a dicey proposition, I know) at running back, an outstanding #1 wide receiver DJ Moore, who racked up 1,157 receiving yards, despite some truly atrocious quarterback play, and, now, a QB in Baker Mayfield who is, whatever you think of him, at worst, league average.

Is this an inspiring situation? No. Should you expect this team to win the division? No. But is there enough here to believe there is a scenario where this could happen, and do the odds to win NFC South warrant an outside bet? Yes. Additionally, the Panthers have upgraded at the sport’s most important position and should be capable of taking advantage of other teams’ stumbles. At the very least, with upgraded QB play and (hopefully) more than seven games from McCaffery, DJ Moore is a safe bet to come within 56 yards of last year’s total.

The biggest question about the Saints is whether they can deliver offensively. Yep, the Brees-Payton era is well and truly over.

However, thanks to an ultra-aggressive approach to team-building, the Saints could ride a dominant, top-five defense packed with stars at each level back to contention.

The problem is that there are now serious, season-threatening questions on offense. Pro Bowl left tackle Tarik Armstead is now in Miami. The engine of the offense, running back Alvin Kamara, will miss time due to a suspension for an alleged assault in Las Vegas. Wide receiver Michael Thomas - a superstar when healthy - missed all last season and had some friction with the organization in the meantime. And play-calling guru and QB whisperer Sean Payton is gone. This all places a lot of pressure on a talented 22-year-old rookie wide receiver (and #11 overall pick), Chris Olave, and, most importantly, quarterback Jameis Winston.

Before tearing his ACL last season, the notoriously turnover-prone Winston was enjoying the most stable season of his career, with just three interceptions in seven games. It's worth noting, though, that this was the first time in recent memory that he hasn’t struggled to protect the ball. After throwing 15 interceptions as a rookie in Tampa in 2015, Winston tossed 18 in his second season. Over the next two years, he threw “only” 25 picks, primarily because he missed 25% of the Bucs’ games. In his last full season as a starter, 2019, he didn't just struggle with turnovers; he tossed an NFL record 30 interceptions.

It's entirely possible that last season’s seven games represented a new era for Jameis. Still, he’s simply got too great a body of work as a turnover machine for me to believe blindly - or resist jumping on +1600 odds of him again leading the NFL in picks.

If everything goes right, the Saints will surpass their win total line (8.5, -110 at FanDuel) and challenge for a division title (+320 at Caesar). However, many needles need to be threaded for that to happen. This is a team with one of the widest ranges of possible outcomes this season. With the Winston wager protecting the downside, the best value play on the Saints’ upside is a plus-money proposition on reaching the playoffs in an NFC field that gets thin quickly.

It makes sense that the Bucs are prohibitive favorites (-270 with FanDuel) to win this division. They're loaded with elite talent at the skill positions (even before Rob Gronkowski’s inevitable mid- to late-season return) and still boast a defense that’s stacked from top to bottom. And, of course, #12’s still under center. There is a problem, though; like all quarterbacks, Tom Brady is only at his best when upright. There are concerns on that front in Tampa.

In addition to the surprising retirement of Pro Bowl guard Ali Marpet, Pro Bowl center Ryan Jensen suffered a potentially season-ending knee injury in training camp. Suddenly, the O-line looks thin, inexperienced, and unquestionably, inferior to last season’s. That’s not ideal when the key to your season is a quarterbacking savant whose quickness and lateral mobility are those of the 45-year-old-man rather than a modern quarterback.

I've said it before, and I'll repeat it, doubting Tom Brady is a bad plan. I’m not here to suggest that you start doing so now. However, there is a non-zero chance that the offensive line will be a real issue in 2022. If that’s the case, Brady could be severely hampered (or injured), sending the Bucs’ season off the rails. It’s a realistic enough scenario that a near-five-to-one insurance policy feels prudent.

Another of my favorite NFC South predictions is the UNDER on 4,500.5 passing yards from Brady. Regardless of how the season plays, the Bucs will likely lean more heavily on their running game to protect Brady from injury and regular season wear-and-tear to ensure that he’s healthy and fresh for the playoffs.

Is the NFC South division set to be another two-horse race? Interested in more football content? Be sure to read our guide: How To Bet on American Football or check out our picks for the AFC North league and the NFC North League and visit our odds comparison tool to compare the latest odds.

What teams are in the NFC South?

The NFC South consists of four teams; the Atlanta Falcons, the Carolina Panthers, The New Orleans Saints, and the Tampa Bay Buccaneers.

With a regular season record of 13-4, the Tampa Bay Buccaneers won the NFC South in 2021.

How many times do NFC South teams play each other?

The teams in the NFC South will play one another twice in 2022, once in each team’s home stadium.

He currently also writes for Squawka, and his work has been published in The Los Angeles Times, Yahoo Sports, SI.com, and on ESPN.