In some ways, the 2021-22 season in the NHL Central Division played out in three tiers. The Arizona Coyotes and Chicago Blackhawks battled for the basement, and the Winnipeg Jets, Dallas Stars, and Nashville Predators tussled for the middle. At the same time, Colorado, Minnesota, and St. Louis clashed for division supremacy. In the end, the Avalanche won the Central and claimed Lord Stanley’s Cup. 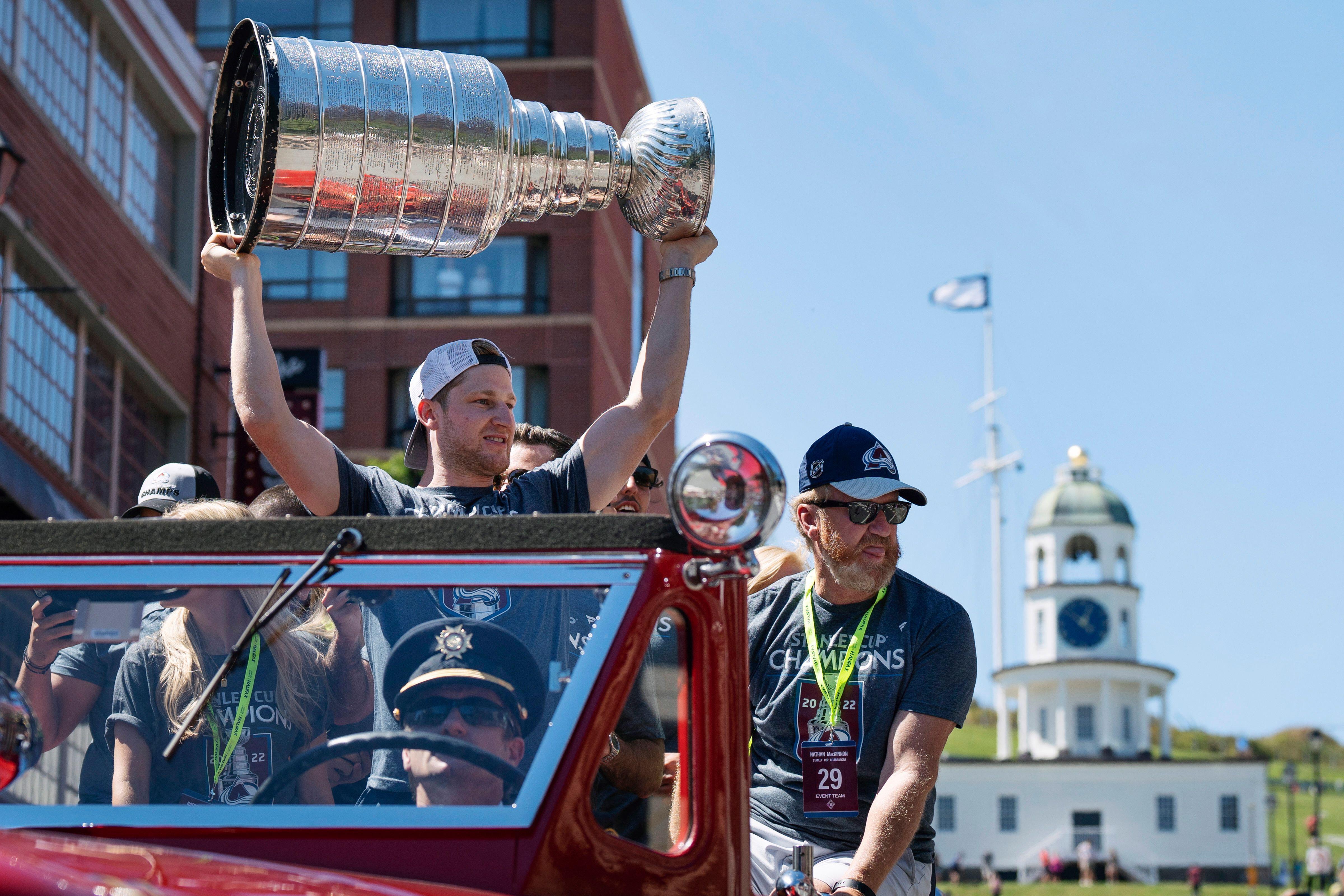 After having a great season, Minnesota folded like an accordion against St. Louis in the first round. Before Jordan Binnington’s injury, St. Louis was even with Colorado. The Avs went on to advance in six games as the Blues had likely their toughest test in the postseason.

NHL Central Division predictions are straightforward heading into the 2022-23 season. The Avalanche look poised to repeat as division champions while Minnesota and St. Louis battle for second place. Nashville could be a real wild card, and even the Dallas Stars might be able to surprise if the offense can score a few more goals.

Other than Colorado, some big questions surround these teams heading into the 2022-2023 campaign. Let’s take a closer look at how the sportsbooks view the teams and where you can find value.

It's nuts that the Colorado Avalanche amassed 119 points, endured mediocre playoff goaltending, and still won the Stanley Cup. That, however, describes their 2021-22 season. They were a Stanley Cup favorite wire to wire and delivered. Now, the question is, what happens this year?

Darcy Kuemper is off to Washington, and Alexandar Georgiev was brought in from New York to help with the goaltending duties. Pavel Francouz figures to be the “1A” in goal. Colorado just needs steady and consistent goaltending. If healthy, this duo can produce just that behind a team that allowed a mere 232 goals (7th in the NHL) in 2021-22.

Coach Jared Bednar has shown an ability to get performances, when needed, from his team, and those skills will be tested in avoiding a “Stanley Cup Hangover.” Even with Nazem Kadri leaving for Calgary, the Colorado Avalanche have more than enough offense to come close to the 312 goals scored last year (3rd in the NHL). Their lineup is stacked with players like Cale Makar, Nathan MacKinnon, and Gabriel Landeskog.

Given all this, it’s easy to look at FanDuel’s Central Division odds and back the Avalanche at -140. Finally, with that goal differential of +80, “over 112.5 points” for the Avalanche is a very reasonable -115 with PointsBet.

Analyzing the Wild is interesting. Minnesota lost Kevin Fiala via trade to the Los Angeles Kings. Thankfully, Kirill Kaprizov was able to get out of Russia and will be able to try for another 100-point season (108 in 2021-22). Minnesota scored 305 goals last year, which ranked fifth. At the other end of the ice, Cam Talbot departed, meaning 37-year-old Marc-Andre Fleury stepped up to fill his skates as a starter.

There are questions if Fleury can last an entire season. He played 56 games, including 11 with Minnesota (2.74 goals against average, .910 save percentage), last year, but they will need good availability for stability. Of equal concern is how the Wild might reverse amongst the worse penalty kills in the league, with a 76.1% penalty kill (and just 70% over the second half of the season) that was 3.3% below the league average. That could age Fleury quickly.

The 113-point Wild team from last year is poised to turn in another solid, yet maybe unspectacular, regular season. The emergence of players like Matt Boldy and Marco Rossi will be integral in determining Minnesota’s fate. Can they form that secondary scoring punch needed? Even if they can, the health of players like Mathew Dumba, Jared Spurgeon, and Fleury is of chief concern.  The Central Division odds agree that Minnesota is not recommended. There is serious value in backing the UNDER.

Last year the St. Louis Blues surprised some pundits (fourth in goals scored, 27% on the power-play) and provided eventual Stanley Cup winners, Colorado, their toughest test. St. Louis had Colorado on the ropes a few times in the second round before falling in six games.

As far as Central Division predictions go, the Blues could be a bit volatile and did lose David Perron. However, if Jordan Binnington stays healthy and players like Robert Thomas and Jordan Kyrou step up, the Blues could be undervalued. Add in the potential of another good Vladimir Tarasenko season (82 points in 75 games last year), and St. Louis may be in good shape.

St. Louis does have some health worries (relying on Torey Krug, Nick Leddy, and Justin Faulk is not easy), but the Blues’ young players (e.g., Kyrou [24> and Thomas [23>) help provide a good mix of youth and experience. Add Ryan O’Reilly’s leadership, and they are a dangerous team.

When looking at the Central Division odds, the idea is to take the over on St. Louis to get to 95 points, or even 100. That seems like as low of a number as any. With +1100 odds at PointsBet, it may even be worth a look to toss a few dollars on St. Louis to win the division.

Last year, the Predators scuttled and struggled a good deal. Yes, there were questions about the offense, but there were many upsides (the power play, for example, clicked at 24.5%). As a year has passed, things may look a bit sunnier for Nashville this season.

As far as Central Division predictions are concerned, the Predators could benefit as other teams take small steps backward. Matt Duchene and Filip Forsberg could reach 40 goals again, and they boast Nino Niederreiter (a perennial 20-goal scorer who should see more than 15 minutes of ice time). Expect a slight uptick from the 266 goals of last season (15th in the NHL).

Now that John Hynes has Alain Nasreddine in the mix as a defensive assistant coach, Nashville is expected to improve from their 79.2% penalty kill and 252 goals allowed (16th in the NHL). Roman Josi led all defensemen in points with 96 and could easily top 80 points, while players like Yakov Trenin, Dante Fabbro, and Eeli Tolvanen progress up the depth chart.

When looking at Central Division odds, the idea is to take the over on Nashville to get to 98 points. Winning the division is not recommended here.

The Rest of the Division

When it comes to other Central Division predictions, this can go from muddy to crappy. While a lot has changed this season, some things have remained constant. For example, the Winnipeg Jets are still a mess. Rick Bowness has been brought in to clean up what was left when Paul Maurice abruptly exited last year. This has led to a lot of change. He has already stripped Blake Wheeler of captaincy, and younger players like Nik Ehlers are worried. The Jets were the definition of average last season and will be in transition this.

Bowness will try and get the Jets to play better defensively. They had a 75% penalty kill, and Connor Hellebuyck, who was in goal for 66 games last season, might need to play upwards of 70 games this time without Eric Comrie backing up. That is a recipe for disaster. The under at 87.5 is an easy wager, given the likely mess.

What about the Dallas Stars? Last season, the Stars backed into the playoffs after blowing a multiple-goal lead at home against Arizona, of all teams. They brought in Peter DeBoer, fired from Vegas after missing the playoffs, as a more offensive-minded coach was likely needed.

Dallas ranked 21st in offense last season and has almost the same cast aside from Mason Marchment (47 points in 54 games). Was his breakout in Florida a fluke the previous season? We’ll see. The problem is he may have fewer chances in Dallas.

Jamie Benn and Tyler Seguin are not the same, and Joe Pavelski cannot near 80-point seasons forever at 38. Then, there is Jake Oettinger. Can he start 50+ games and provide the goaltending he did at times last year? Oettinger won 30 games and nearly defeated the Calgary Flames in Round 1 by himself. The problem is Dallas has an issue staying healthy. Players like Roope Hintz and Jason Robertson are immensely talented, but that core is compromised again. The under here is a friendly wager in the Central Division odds as the older players may break down enough to keep them out of the playoffs. Take that bet too.

The Chicago Blackhawks and Arizona Coyotes were awful last season. Neither team improved and may fall “hard for Connor Bedard.” Both teams will battle for the top pick in the 2023 NHL Draft. Betting the under on points is a wise route with both projected in the 60s. Chicago traded Alex DeBrincat in the off-season and maybe finding Patrick Kane and Jonathan Toews new homes this year. With Luke Richardson inheriting a complete rebuild, the Blackhawks will drop some more.

Arizona is even simpler. The Coyotes finished with 57 points in 2021-22 and already have roster worries plenty. The offense is even worse if Clayton Keller misses any time (63 points in 67 games); they scored just 207 goals (worst in the NHL) last season. Arizona’s -106 goal differential was also 32nd out of 32 teams. Without significant improvements, the Coyotes still project to be among the worst in all phases again. Their shot differential was nearly -800, a level not seen since the 2014-15 Buffalo Sabres. Expect little change and hammer the under here.

The Colorado Avalanche won the Central Division in 2021-22. They finished with a six-point cushion over the second-place Minnesota Wild.

How many NHL teams are in the Central Division?

We could be looking at a similar tale to last season in the NHL Central Division. Interested in more NHL content? Be sure to read our guide: How To Win at Sports Betting or check out our complete handbook for our full NHL predictions and our Metro and Atlantic Division Previews. Visit our odds comparison tool to compare the latest odds.