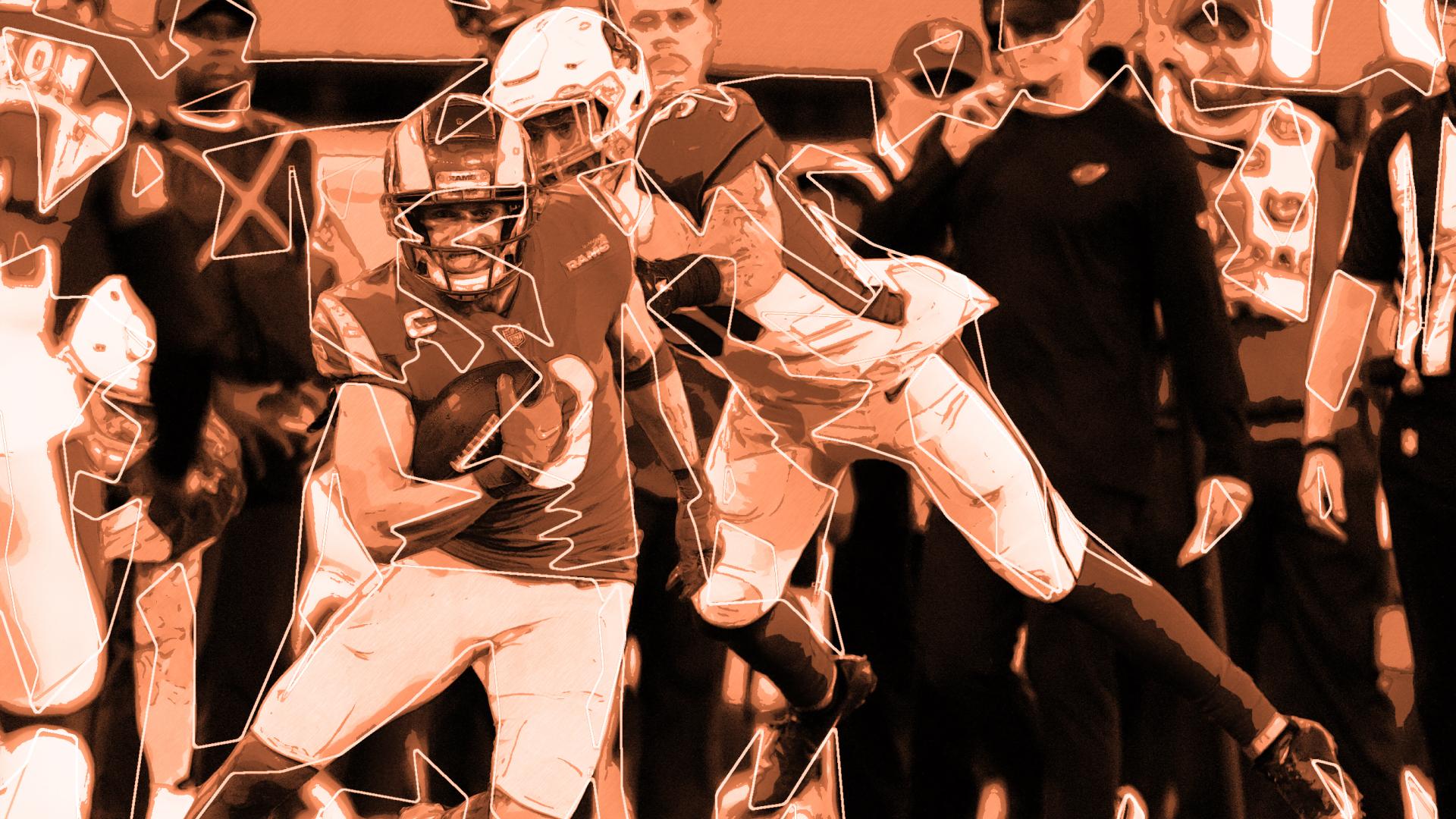 In our NFL picks for Week 6, we’re breaking down a compelling intra-conference contest, a key NFC East matchup, and an important tilt between AFC contenders.

The NFL odds in Week 6 indicate a competitive slate of games on Sunday, with six of the 12 contests opening with lines at three points or less. All but three of the games this week sport spreads of less than a touchdown, so determining the right play is crucial. The NFL odds for Week 6 hold the added wrinkle of bye weeks, as Houston, Las Vegas and Tennessee all get rest.

Week 6’s odds also seem to be responding to the bunched nature of the standings. All but one contest features teams with either the same record or within one game of one another in the standings. That fact underscores the importance of the Week 6 slate, thus making picks all the more difficult. Compelling storylines also remain in play for several teams. Taking a deeper look at some of the most exciting matchups and lines of the NFL Week 6 schedule should be helpful ahead of any picks.

For more NFL content, check out our Betting Resources. We’ll have the latest weekly previews and picks for the big Monday and Thursday night football games.

The 2022 NFL saw its first coaching casualty this week when the Carolina Panthers canned head coach Matt Rhule. The Panthers managed just an 11-27 record during Rhule’s three-year tenure. The final straw came last week as Carolina got crushed at home by the San Francisco 49ers 37-15. At 1-4, the Panthers sit in the NFC South cellar and now travel west to face the defending Super Bowl champions in desperate need of a win in their own right.

The Rams’ Super Bowl defense started with a flop in Week 1 against the Buffalo Bills. But after back-to-back wins following that setback, it seemed like L.A. righted the ship. Since then, however, the vaunted Rams offense has managed just one touchdown total in a pair of ugly NFC losses. L.A. wasted another solid effort from its defense in last week’s 22-10 setback at the hands of the Dallas Cowboys, influencing the NFL odds in Week 6.

The key to L.A.’s offensive struggles this season comes down to Matthew Stafford’s effectiveness. He’s thrown seven interceptions thus far, tied for the league lead with Matt Ryan. Perhaps not ironically, Stafford and Ryan lead all quarterbacks in timed sacked (21) this season. Carolina doesn’t boast a fearsome defense, ranking in the bottom half of the NFL in QB pressures and pressure percentage and being tied for the fourth-fewest sacks so far (8). That said, the Panthers’ defense can be opportunistic, as evidenced by their five takeaways this season.

The NFL odds for Week 6 feature just one line with a double-digit spread, and it’s this one. Despite recent struggles, the Rams have an offensive pedigree that Carolina simply doesn’t. Combine this with a below-average Panthers defense, and this should be a comfortable Rams win, beating the spread. What’s more, with the Panthers making the cross-country trip with backup P.J. Walker at quarterback following Baker Mayfield’s injury last week, don’t expect this to be a high-scoring contest and favor the Under.

The NFL’s marquee matchup in Week 6 is a rematch from arguably the greatest playoff game of all time. The Bills come to Kansas City following a 38-3 beatdown of the Pittsburgh Steelers in Buffalo. That dominance makes many bettors lean toward Buffalo as the odds for Week 6 show. However, the Chiefs snagged a come-from-behind victory in Week 5, in which tight end Travis Kelce found the end zone four times. Both teams enter this one with 4-1 records (tops in the AFC) and one-game leads in their respective divisions.

The Bills saw their starting quarterback, Josh Allen, submit another MVP-level performance last week. Allen also threw for 424 yards and four touchdowns, adding 42 yards on the ground. He connected with wide receivers Stefon Diggs and Gabe Davis for 273 of those yards and three scores. Buffalo boasts the league’s best point differential at this point (plus-91), though most of that comes thanks to lopsided home victories.

The Chiefs haven’t been anywhere near as dominant, though they enter this marquee matchup with the league’s top-scoring offense. What’s held Kansas City back at times this season has been its defense, which languishes in the bottom third of the league in points allowed (125). The Chiefs’ defense surrenders 255.6 passing yards per game (24th), though they’ve generated the fourth-most QB pressures (57) and fifth-most QB hits (22).

This game marks the fifth matchup between these AFC contenders, with Allen and Patrick Mahomes at quarterback. The Chiefs hold a 3-1 advantage straight up and against the spread in those previous matchups. Those games have also been high-scoring affairs, with the Over hitting in each of the last three games and five of the previous six in Kansas City. The Chiefs’ defense can only improve, so we’re going with history in picking a Chiefs win in a high-scoring and tight affair driven by two star QBs.

The NFL sees just one undefeated team heading into its Week 6 slate, the Philadelphia Eagles. While the 5-0 mark is impressive, the Eagles have sputtered some over the last few weeks. Quarterback Jalen Hurts remains in the MVP conversation with his play early this season. The Cowboys, meanwhile, continue to lean on their defense while playing without starting quarterback Dak Prescott. Dallas scored an impressive road victory last week, topping the defending Super Bowl champion Los Angeles Rams on the road to improve to 4-1.

The Eagles enter this key NFC East battle with a one-game lead on Dallas in the division, despite the Cowboys going with Cooper Rush at quarterback these days. There’s a chance Prescott returns for this contest, but the Cowboys don’t want to rush him back from the hand injury. That quarterback uncertainty helps push the NFL odds in Week 6 toward the home team.

At this point, Philadelphia sitting atop the NFC East isn’t a fluke, given the play of Hurts and what’s largely been a dominant defensive start. The Eagles enter Week 6 tied for the league lead in takeaways (11) and possess the league’s top turnover differential (plus-9). They rank fifth in the NFL in passing defense, allowing 189.4 passing yards per game, and sport the top yards per attempt average (5.6) thus far. The pass rush has registered 17 sacks, fourth-most, and 60 QB pressures, third-most.

Although Hurts has yet to beat the Cowboys in his young career, this is the best Eagles team he’s been a part of. The Eagles have covered twice as favorites of more than five points this season and they’re facing a Dallas offense that tends to struggle on third downs (30.9 percent conversion rate).

The betting favorite has covered the spread in 10 of the last 13 meetings between these teams. What’s more, the home team is 6-1 against the spread in the last seven games in this series. The Under has hit in five of the last seven Eagles-Cowboys matchups in Philadelphia. We can’t see anything changing for this matchup and predict another Eagles win with Hurts influence helping them beat the spread. Meanwhile, Prescott’s absence supports the Under. Add in history to both of these factors, and a good value double is worth a punt.

What did we learn from Week 5 in the NFL?

We learned that the NFL’s new concussion protocol adds another layer of uncertainty as spotters can now have a player removed from the game even if that player passes the concussion protocol, as was the case with Teddy Bridgewater for the Dolphins in their loss to the New York Jets.

We also learned that the Bills-Chiefs matchup in Week 6 might be a preview of the AFC championship while the NFC remains wide open at this point.

What NFL teams have a bye in week 6?

Week 6 is the first week of the 2022 NFL season that teams start to have byes. In Week 6, the Detroit Lions, Houston Texans, Las Vegas Raiders, and Tennessee Titans have a bye.

We've got all the latest and best Philadelphia Eagles sports betting promo codes - giving you access to some fantastic cash rewards, free bets, risk-free bets, and much more.

The hits keep coming this season, and the NFL Week 5 odds are no doubt a challenge. It could be another chaotic week with these marquee AFC matchups.

NFL Week 6 gives us some throwbacks to big matchups, promising a lot of action. What do you think of our NFL week 6 picks? If you're interested in more football content, be sure to read our guide: How To Bet on American Football, and visit our odds comparison tool to compare the latest NFL Week 6 odds.

David has more than 15 years of writing experience in sports and sports betting. Prior to becoming a full-time writer, he was a high school English, Creative Writing, and Journalism teacher for nearly 20 years.

David writes for a variety of publications, including Sidelines, Scorebook Live (SBLive), and Five Reasons Sports, and has previously been published in the Miami Herald and USA Today.