Liverpool is back to winning ways, can they maintain this moving forward? Our Premier League predictions for week 5 look at where the best value lies within the fixtures for the “Big Six” and what we can expect from this week’s games.

The Premier League is in full swing. After a concerning start for some of the big teams, we’re beginning to see teams get back to winning ways.

Teams in the top 4 are separated by just two points. Manchester City, Tottenham Hotspur, and Brighton have tallied ten points whilst a developing Arsenal have pulled away at the top of the table with 12 points following a perfect start. No one can knock this start for Arteta, yet facing two of the newly promoted sides in Bournemouth and Fulham have aided to this record. Brighton remains the defensive juggernaut of the league, conceding just one goal to Manchester United makes it crystal clear where their strengths lie.

We were witnesses of another Premier League record over the weekend after Liverpool thrashed Bournemouth 9-0. If Liverpool were looking to make a statement after a poor start, they certainly achieved this. Six of the reds made the scoresheet with the omission of Mohammed Salah, despite missing two big chances, it seems that Klopp's team is hitting the right notes from last season.

West Ham will be pleased with their performance against Villa, pulling them out of the relegation zone, a goal from Pablo Fornals has only intensified pressure on Steven Gerrard. Everton falls down into the relegation zone. An uninspiring draw against Brentford plays poorly among the backdrop of the issues at the club, however, Neal Maupay comes in from Brighton to help bolster up their attack. Whilst a good signing on paper, Maupay never lives up to expectation, falling in the bottom 10% of players when looking at their expected goals, hardly a positive sign for a striker.

Arteta will be delighted with the performance of his team so far. In comparison to the 21/22 season, Arsenal was yet to get a point until this stage of the season. No doubt, the introductions of Jesus and Zinchenko have transformed the squad. Both were proven winners with strengths their predecessors lacked. For a desperate Aston Villa, going against the Gunners run of form is a massive ask, but one that is not lost on Gerrard. Their upcoming fixtures mean they face Arsenal away followed by Manchester City at home, if they lose both of these then this will be the worst run in Aston Villas's history since 1874…

Villa looks to be in deep trouble. After a spell of poor summer signings with a lack of experience in tougher European leagues, questions are being raised about their competency. Conceding 7 goals from 46 shots raises alarm bells, yet their problems come in the final third. With 49 shots and 13 on target, they’re missing that final touch. They’ll need to start finding the net, otherwise, this could be a long season for them.

Arsenal continues their winning streak. Goals from Odegaard and Gabriel helped them crank out a 2-1 victory over Fulham. With approximately 5 shots on target at least per game, they’re better at taking their chances with a shot conversion rate of 12.9%, only beaten by Liverpool and Manchester City. This game will be won in the final third for Arsenal, Villas's weaknesses lie in defense and they’ve left it too late for reinforcements.

If Villa can hold off Arsenal from developing in the final third, they may have a fighting chance, however, a thin squad is unlikely to put up much of a fighting chance. Arsenal with a two-goal handicap looks promising considering their current form.

Four points for Steve Cooper's men don’t reflect the amount of change they’ve undergone this season. After their 19th signing of the summer transfer window, they’ll be hoping for some consistency if they want a shot at staying in the top flight. Their next run of fixtures; Manchester City, Bournemouth, Leeds, Fulham, and Leicester City provides them a variety of challenges, making it difficult to hit a run of form.

Before they can begin to look forward, they have to face the titans, Manchester City. Following a fantastic second-half display against Crystal Palace, rumors have it fellow Premier League managers are discussing how to contain Erling Haaland. Bagging his first Premier League hat trick, it is clear that City has adapted to the Norwegians' style of play. Opting to feed balls through to a striker who prefers to sit on the edge of the penalty box rather than work creatively dismembering opponents' defense. This is clearly working, he’s currently the league's top goalscorer (6) and they’ve had more shots than any other team (73).

Nottingham Forest cannot afford to let City take these chances, with the creativity of Kevin De Bryue and Bernando Silva, Forest will need to remain tighter in defense than usual to prevent them from finding their new frontman. This will require a change up for them, as they’ve been expected to concede nearly 8 goals from open play so far this season, a record matched by Fulham and Everton.

City is beginning to find its stride, the expectation will be on Haaland, Silva, and Gundogan to continue on finding the back of the net. It’s no secret that Haaland was brought in to help them clinch the Champions League, there are concerns surrounding potential rotation, yet this week seems to be his last chance before potentially being benched ahead of Villa.

We don’t think anyone had Liverpool written off for a second, not even for a mid-table battle. Bouncing back in style with a 9-0 thrashing over Bournemouth, sending a clear message across the Premier League. Met by the unjust sacking of Scott Parker, the first Premier League manager to go within this campaign, we don’t think this is a blip, but perhaps just getting started.

Newcastle will have their hands full when they travel to Anfield. They seemingly kept control of the game against Wolves with 64% and 21 shots compared to 10, so will be bitterly disappointed following a 1-1 draw against Bruno Lage and his team. So what went wrong? Despite a brilliant goal from Saint-Maximin, Newcastle failed to get into the opposition's penalty box more than 16 times. This is a stark contrast to Wolves who managed 40 touches in the Magpies penalty zone. Ahead of Liverpool, this is not something they can afford to do.

Recording 71 shots and 24 on target so far, Liverpool is averaging 17 shots per game so far. If they can hit the same tempo as they did against Bournemouth, then Newcastle could be in trouble. Predicting individual performances after a 9-0 win is challenging. Firminio and Diaz were the standouts, both bagging a brace. Diaz has come in and clicked with the style of play quicker than anyone could have anticipated. Currently averaging 2.33 shots each game, we fancy him to score, considering his competition in Kieran Trippier is out with a muscle injury.

Liverpool is proving to be a force to be reckoned with. It’s fair to say we might not see a performance like that again this season, however, it’ll motivate the reds to keep moving forward. We expect a Liverpool win with some familiar faces on the score sheet.

Narrative: Manchester United to continue redemption ark with a win at struggling Foxes, with help from Jadon Sancho. 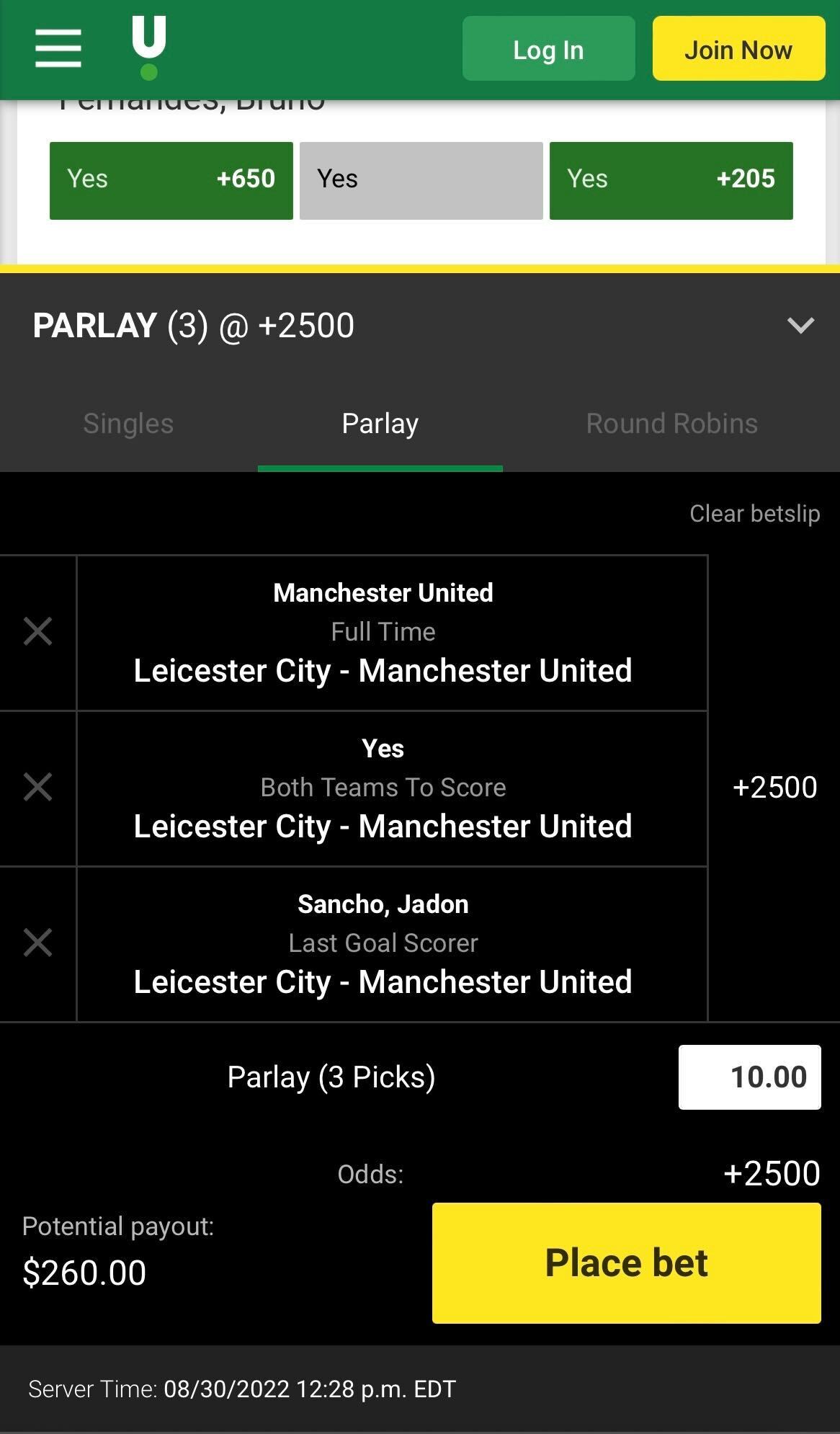 The Premier League table has been shaken up! Our Premier League predictions for week 4 look at where the best value lies within the fixtures for the “Big Six” and what we can expect from this week’s games.

Will there be any major upsets to our Premier League week 5 predictions? Our EPL predictions for week 5 look at what's in store for the heavy hitters in this upcoming gameday. If you're looking for more soccer content, read our guide: How To Bet on Soccer, and visit our odds comparison tool to compare the latest odds.

Be sure to come back next week for our Premier League week 6 predictions.